To order, please click on the link next to the book you are interested in to send an email. Once we confirm that we have stock of the book you would like, we will request payment.

Wicked, Wilful and Unconventional Women (No cover available yet)

In 1840 John Mayfield arrived in Warwick to take command of the new Police Force. Although anticipating opposition, he was surprised to find it coming from a prominent member of the Watch Committee. When a body is found, John is soon fighting to save his career and life. And he must choose between a young widow, and the wife of a man who is awaiting trial. 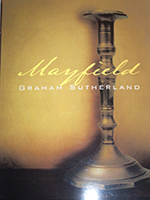 Struggling to accept the sudden departure of the love of his live, John Mayfield began seeing Laura Grant. Whilst investigating the suspicious death of a local bank manager, John first met Dr Richard Gilson, unaware he is also keen to meet Laura. Soon afterwards the bank is robbed and other murders take place. Whilst this is happening, someone is poisoning John`s best friend, Dr Thomas Waldren, and the victim`s wife is the main suspect.

When John Mayfield received an unexpected visitor, it reminded him that the past was never far from his mind. Warwick is shaken by a chilling series of murders, and changes in his personal life threaten to overtake everything. The local newspaper is stirring up trouble for him, and as the mystery unravels, it is clear this will not be an easy battle.

A collection of short ghost stories

Stories from here were used by Birmingham Television, titled The Unexplained . It is proposed to link these two books plus some other stories and turn them into a single publication later this year or early 2017. being re-printed and enlarged with more supernatural stories and retitled as Old Cavendish. Ready Spring/early Summer 2019.


A collection of short crime stories

Will be available as paperback and e-book

In 1846, young Richard Fielding has to leave his comfortable home in Warwick, and work in a Birmingham factory. Soon he is wanted for murders which he has not committed.

Not knowing who to trust, especially his guardian, Richard is helped by Jenny Barlow, a work colleague in the same factory. But suspecting Jenny is not all that she appears to be, Richard makes his own escape.

He is soon being hunted by the police and various radical factions, who are planning a revolution. Taking refuge with a gang of railway navvies, his future looks anything but secure, especially when his true identity is discovered. Why does everybody want the strange rings which Richard mysteriously received? And how is the shadowy English spymaster, known only as the Spider, involved?

Then there is the devious Mallory Kempe who has his own, very personal reasons for ruining Richard`s life and wanting him dead: and who better to do his bidding than the merciless Jasper Turnbull.

Against these odds, Richard struggles to clear his name and survive!

- Now available as paperback and e-book

The year is 1902 and Conrad Hunter-Smythe, usually called Hunter, has been tasked with assassinating King Edward VII on behalf of the Boers during the South African War. Even before leaving South Africa, Hunter has been betrayed and is being hunted by his employers, but not for the benefit of the King. Searching for Hunter in England are the police led by Inspector Andrew Harrison of the Warwickshire Constabulary and hindered by Chief Constable Robert Iain McKenzie. Someone wants the King and Hunter dead. Common sense tells Hunter to abandon the idea, but he has his own reasons for going to England. Matters reach a climax when the King visits Warwick.

Also available as an e-book

Walter Pultney Cavendish was killed in 1925. Denied justice by those who stopped the subsequent police enquiry into the cause of his death – Cavendish`s ghost regularly haunts the crags Road seeking vengeance.

Old Cavendish is a collection of supernatural stories happening from the early 19th century to the present day. Several of these tales have been televised.

Available on Amazon and e-books

In the months preceding the Coronation of George V in June 1911, a German Secret Service group of sleeping agents is established in Warwick. Their aim is to cause mayhem in England when ordered to so by the Kaiser. Pitted against them is Andrew Harrison, now promoted to superintendent and his team. He has his work cut out with bomb attacks on the town, wages robberies and murder. To make matters worse, his beloved Helen has become emotionally involved with the enemy. Whose side is she on?

Graham Sutherland is a Local author and professional speaker.

Graham & Maureen Sutherland
Members of the Institute of Tourist Guidling